This digest of job, internship, and volunteer opportunities is published weekly; each post is live for four weeks. 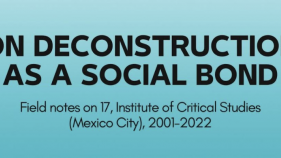 On Deconstruction as a Social Bond: Field notes on 17, Institute of Critical Studies

17, Instituto de Estudios Críticos was established in Mexico City, in 2001. Its founding trope was the Blind Photographer and its original intuition was that of a silence-producing machine. Over the last two decades it has given forth to an archipelago of sorts, including the first Spanish-speaking accredited postgraduate programs in Critical Theory, a Center for Advanced Studies, a publishing house, a consultancy, and an online radio station. More recently it also designed a social and economic mechanism designed to provide support for the academic, cultural and social communities in Latin America and their initiatives: the “Critical Ensemble” incorporating the Mutual social network, the Floating Market online exchange, and Critical Switch, a platform for new initiatives. Although originally concerned with Literature, Philosophy, Art, Political Thought and Psychoanalysis, the Institute gradually focused too on the study of Gender, "Disability", Health, Childhood, Pedagogy, Mediation, Improvisation, Historicity, Territoriality and Management. It has convened thirty-five international colloquiums, published 700 authors, offered some 1,500 courses, and awarded a dozen honorary doctorates.

A conversation with the project’s leaders and other experts to learn about this innovative effort in pursuit of transparency.

Cultivating Identity and Community through Latin American Sports and Games

A professional development guide launch presented by The K-12 Outreach Program at ILAS, Columbia University. This curriculum guide is an exploratory collection of traditional, family games and sports played in Latin America for all K-12 teachers. It highlights physical activities and athletics practiced throughout the region to discover how multiple forms of identity develop and change over time, as well as their connection to culture, social environments, and love for the game. The K-12 Outreach Program at ILAS, Columbia University, invites K-12 teachers and educators to join the author as they present and discuss the professional development guide.

END_OF_DOCUMENT_TOKEN_TO_BE_REPLACED

Learn about upcoming events, webinars, and ILAS news by subscribing to our newsletter.